Tegan is back onto solids now, but last night, after a feeble bowl of lentil soup, we lay low and watched Pitch Perfect. If you’ve never seen it, it’s about an all-female acapella group. Enemies become friends, friends become enemies, and there’s lots of great singing, if you’re into that kind of thing, which I am. But the best part by far is Rebel Wilson’s character, Fat Amy.

I’d seen the movie already, but, perhaps because I wasn’t single then, Fat Amy’s character didn’t stand out at me the way she did this time. It’s not so much that she is (gasp) not a stick insect with boobs. It’s that Fat Amy doesn’t just think she’s hot, she knows she’s hot. She doesn’t question her gorgeousness, she OWNS it. And, thus, hordes of men chase after her, to the point that she actually craves female company. She volunteers to do solos, she drives the bus, she is queen of the fucking world. I love Fat Amy. 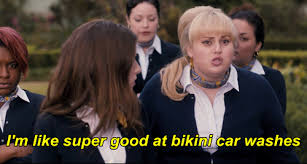 Watching the film again, it caught up with me that I’ve forgotten my inner Fat Amy these last few weeks. In my early days of being single, surrounded as I was in Bali by stick insects with boobs (spotted at my local café: girl wearing a string bikini, combat boots and a holster,) I got really down on my body. I didn’t see how bad it had gotten until I brought it up with my girlfriends, whom I considered Fat Amys in their own, fabulous ways.

“Are you kidding? I’m totally faking it,” said Sabrina, my Australian friend who owned any dance floor that came her way, and was being Tindered by the male population of Canggu like she was going out of style.

“I feel like I look like a man,” said Morgan, my toned American yogi pal, whose bod I had envied in the pool that afternoon. And Leannah, whom I lived with and who regularly ate her post-surfing breakfast in her bikini, admitted to having once considered a boob job.

And yet these women were some of the most beautiful I had ever know. 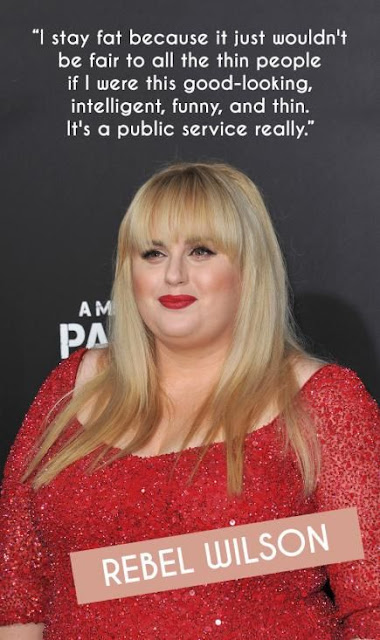 And thus began Operation Body Image, which launched of all of us joining a actual workshop on the subject that weekend. Allison Dryja, who ran the workshop and is a body image coach, asked us each where our low opinions of our body originated.

I had never considered this question before. Until now, my disdain for my body was just a factual part of life, like taxes, or breathing.

For some of the girls, it was mothers who had openly criticized their own bodies, and then did the same with their daughters. When my turn came, the answer just came out.

Which, given my appreciation for my friends’ unique beauty, is as ironic as it gets.

We did a group meditation to close the workshop. (Remember, this is Bali.) The exercise was to put our hands on different parts of our bodies and ask them what they wanted. Which is pretty hippy dippy even for me, but also let me see how much spite and anger I directed towards my physical imperfections on a daily and sometimes hourly basis, and how good it felt to stop. It had never helped, anyway. I have been bigger and smaller in my life, but none of the grief or judgment I’ve delivered to my stomach or boobs or thighs has done anything except make me feel like shit. I had forgotten or maybe never learned that holding up an ugly mirror up to myself was a choice.

Fat Amy was on my mind as Tegan and I climbed the travertines in Pamukkale today. You walk them barefoot, and can stop and swim in the pools along the way, so many of the women we passed were hiking in their bathing suits. I saw bellies and thighs and gravity at work. I saw skinny bodies and starving bodies and post-baby bodies and muscles and flab. Of the hundreds of women we passed, only one would pass for something you’d see a magazine. She was wearing a g-string, and I could tell how hard she’d worked on that body, how many hours and how much sweat and how many cheesecakes denied. And I’m probably projecting, but she didn’t seem particularly happy. 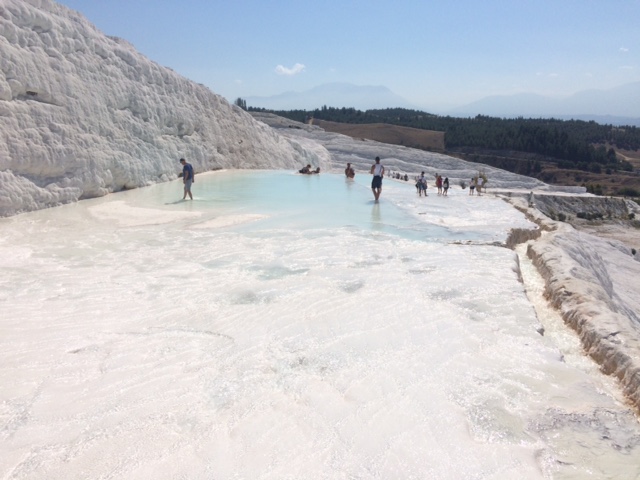 And Pamukkale the kind of place you just want to be happy.

I wished I could deliver Fat Amy energy to every woman we passed. I wished I could remind them – the ones who needed it, anyway – that cutting ourselves with mental scalpels and bruising themselves with harsh words does not make us any thinner or more toned, and definitely does not make us any happier. It reminds me of the Marianne Williamson quote:

“Our deepest fear is not that we are inadequate. Our deepest fear is that we are powerful beyond measure. It is our light, not our darkness that most frightens us. We ask ourselves, Who am I to be brilliant, gorgeous, talented, and fabulous? Actually, who are you not to be? You are a child of God. Your playing small does not serve the world.”

Because if we really, truly all felt like Fat Amy…

If we believed ourselves to be brilliant, gorgeous, talented, and fabulous…

If we woke every morning owning our thighs, our amazingness and the world…

What would we be capable of?