So I was dating that guy.

And the thing was, he wasn’t perfect. But I was so thrilled to find someone who just got me – my love for travel, my desire to change the world, my excitement about using art for social justice – and in Ottawa! So I did get attached. Which is part of why he wasn’t right for me:  he did not. Get attached, I mean. At least, not to me. He wasn’t an asshole (unless you ask my dad), but he did not do feelings. He did not do vulnerability. He was cool.

“Give it time,” I told myself. “Maybe these things take a while to develop. Maybe people change. Maybe vulnerability grows.” So I waited, even though I knew – or at least, the loud lady living in the corner of my brain knew – that people don’t change on a dime like that, unless they are characters in Hollywood movies.

And then, Ruble died.

There is no need to describe the heartbreak of losing a pet to anyone who has experienced it, and perhaps no point describing it to anyone who hasn’t. Ruble filled up my heart. He held me together. In the absence of having kids or much of a normal family, he was my emotional rock, my happy thought, my best friend. Even when we were apart, his existence on this planet made my most difficult times bearable. 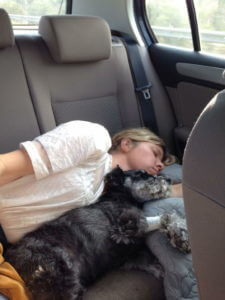 He’d been slowing down for a while. He was on anti-seizure medication, getting a little tubby around the middle, sleeping more and eating less. But I’d hoped we had at least another year or two together. Not a day, which is what I was told one Tuesday in February, after his legs gave out on our morning walk.

And then life became a series of moments I was certain I would not survive.

Speeding to the vet clinic as he gazed at me from the passenger seat.

The phone call from the vet, who told me he had a tumour on his spleen that would burst and kill him if I didn’t put him down.

Our last night together, sleeping on a mattress on the living room floor, me waking up every few minutes to touch him and listen to his breathing, knowing that tomorrow, he would be gone.

Driving back to the clinic. Choosing an urn to put his ashes in. Telling a 20-something in pink scrubs that she could insert a needle into my dog’s front leg, and holding him in my arms as he left this world.

These are the times when you don’t even think about being cool. 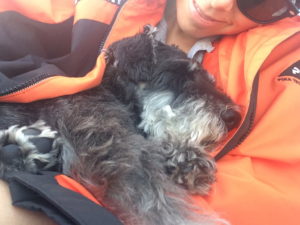 The days that followed knocked the breath out of me. I walked, lost, around a house still strewn with squeaky toys and dotted with nap spots. I stared out at the empty backyard, with paw prints still in the snow. I sat on his blanket on the living room floor. I cried more and harder than I can remember.

It was around then that the dude pulled away. And since cool wasn’t even on the table, I saw how I wasn’t doing either of us any favours be pretending not to care as much as I did – about him, about Ruble, about anything. I told him as much.

“I don’t want a relationship,” he said. (Pretty much verbatim.)

“See ya,” I said, probably a lot less eloquently, and drove off victoriously into the night, because now, everything was going to be okay.

I woke up the next morning feeling even shittier than before.

Normally, in this type of scenario, I would have Ruble. He’d be curled up on the front doormat waiting for me to get home, or waiting impatiently for a cuddle or a wrestling match on the carpet, or following me around as I mopily cooked dinner, looking up at me with that expression of,

“I know you that you haven’t showered today, that your socks don’t match, and that your hair looks like you’ve been in an electrical storm. I know feel like a sad sack who will never find anyone to love you. But I love you. Totally. Without question. Exactly the way you are.

Only someone who loves you that much lets you put a flower in his hair.

Instead I had repeated icy, jagged stabs to the chest when I remembered that I would never see that expression again.

Normal things took superhuman effort during this time. But as the days wore on, I managed to drag myself out into the world. One night, I went to have coffee with my friend Marjorie. I filled her in on Ruble, and about calling it off with the dude.

“I thought I would feel better after listening to my heart,” I told her. “I don’t. I feel like garbage.”

Marjorie, who is so gentle and wise that your shoulders drop two feet just being in the same room as her, put her hand on my arm.

“You have to be patient with yourself,” she said. “It’s going to get easier.”

This act of kindness, plus the fact that I was so used to bawling every five seconds, made me instantly well up.

And so I sobbed on her shoulder for a few minutes, as if that were a thing people normally do in crowded restaurants. Then we went back to our desserts, any semblance of cool now long forgotten.

But as I walked back to my car that night, I noticed I felt different. Sort of… okay. Not like dancing, or even really cracking a smile, but, for the first time in days, not like curling up in the fetal position under the couch. I realized that the kind of gentleness Marjorie had shown me was like a foreign language to me, because I rarely am that gentle with myself. And, almost as worryingly, I seem to actually seek out guys who don’t do gentle, either.

I’m not saying this accusingly. Men of my generation were not taught to be gentle. Having feelings, getting attached – these things were not encouraged when the boys of my age were children. But if I want someone who’s like that, I’d better start practising it on myself.

I need to be, as the expression goes, the person my dog thought I was.

Who is not cool.

Who never will be.

Who has big feelings, and is loud, and, and gets attached. 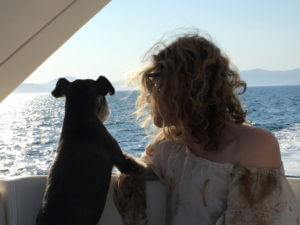 I still cry for Ruble, most days. I still feel like a piece of my soul is missing.

But I’m finally honouring what he taught me: that real love only happens when you take off your armour. And that starts when you accept every single part yourself, as messy and mismatched and uncool as you might be.

And despite the schnauzer-sized hole in my world, something about that feels a lot like freedom.