“What are YOU doing here?”

This is my greeting as I wriggle through the mountains of boots, mitts and snow jackets in the entranceway at Matt and Holly’s. It’s Sunday night, and I’ve been invited for dinner, for which, miraculously, I’ve made it on time. I’m toting salad ingredients and a birthday gift for Matt. I am also operating on four hours sleep, slightly hung over, and haven’t been home since the day before.

My greeter is 4-year old Owen, one of Matt and Holly’s kids. We are good enough friends that I don’t take this question personally, nor do I bat an eye when I open the door wider to see their other child, Simon, twirling around the living room in full showgirl costume. Matt and I were close friends in university, but lost touch slowly throughout our twenties, living in different cities, getting married and having a family (in his case), or getting married and getting divorced and fucking off to travel the world (in mine). Which is why I was stunned to receive a message from him about a year ago, saying that he was having a hard time, and wondering if he could ask my thoughts on the matter.

I wrote back that I was touched that he reached out, but, “I hope it’s not relationship advice you’re after, because you’ve come to the wrong place.”

It was, in fact, relationship advice he was after. As it turned out, he and Holly, married over 10 years, whom everyone (including me) thought was rock solid, were crumbling.

And so, with strange but beautiful timing, two friends who hadn’t exchanged much more than a birthday greeting for the past decade plus became fast penpals. My love life wasn’t doing so hot either, and I realized how desperate I was to have a guy friend’s perspective, and even more so a guy friend whom I’d trust with my life. Maybe it was the fact that neither of us had anything to lose, but since then, Matt and I have shared our most vulnerable sides. We write to each other when the shit hits the fan, and joke together about midlife crises, and our respective adventures in self-help reading. It is Matt with whom I share stuff like the Tinder date who asked me one question all night and then cut me off three words into my answer, the fear that I will never meet anyone I like again, and the possibility that I have become so cynical I won’t know what to do with myself if I do. I am constantly inspired by the amount of work he and Holly put into turning their ship around, their respective willingness to take responsibility for their parts, and for their love and acceptance of their 6-year old’s decision to be a girl, despite having been born otherwise.

Since coming back home, I’ve hung out at Matt and Holly’s a lot. I’ve eaten their food, played with their kids, and slept in their spare room after nights out (nothing says midlife crisis like waking up at 9am to find your buddy shoveling the driveway while you still can’t open one eye.) I’ve shared a lot of intimate things with them, including one that I’ll just throw out here: one of the other reasons I came home is that I was thinking about having a kid on my own.

I won’t go into it more for now. It’s not imminent, nor is it, for obvious reasons, a sure thing.

Later that night, as I sat on their couch reading a book about the Egyptian pyramids to a rapt Simon (turns out the showgirl costume was actually Cleopatra outfit), I could feel one half of me bursting for this kind of connection… and the other half just wanting to go to Egypt. And also, Jordan. And Morocco. And Tunisia, and South Africa. And being overcome with gratitude that I can. As my friend Melissa put it, “Having kids would really get in the way of my life right now.”

I know this is an un-PC thing to admit. Most people with children would cry out that I can’t possibly know what I’m talking about, and that I won’t know love until I have a child. And maybe they’re right. All I know is what I know: the life that I have built, which, despite its imperfections, is pretty damn great.

Speaking of imperfections, I am currently living with my dad.

He’s usually out of the country so it almost doesn’t count. But he is here now, a situation which calls for some awkwardness at certain moments, like, for example, the Saturday night of this same weekend.

“I’m leaving!” I shout, from the doorway, conspicuously clutching an overnight bag.

“When are you back?” my dad shouts back.

“Is it getting serious?”

I roll my eyes, turn bright red and rush out of the house. 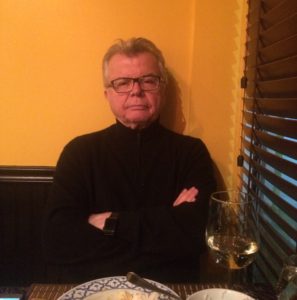 You try lying to this face.

I have, to my surprise and horror, met someone I like.

It’s not serious. I can’t do serious yet. I am still too traumatized by serious. Even leaving a bottle of contact lens solution at his house feels transgressive. He gave me a toothbrush because I forgot mine, and I had to stop myself from throwing it out afterwards to delete the evidence.

He loves to travel.

He doesn’t want kids. At all. Ever.

“As long as you’re having fun,” Holly declares, “that’s all that matters.”

“Goodnight, children!” I yell to Owen and Simon, as Matt tucks them in for bed.

“Goodnight, Grandma!” Owen shouts back, and I laugh.

I help with the dishes, and give Matt the self-help book I bought him. Then I drive through the quiet streets, back to the closest thing I’ve had to home in a while. I unlock the door and tiptoe inside to find my dad on the armchair, legs stretched out, in front of a TV show about the Egyptian pyramids, and fast asleep.