“Maybe I’ll get a flu,” I think, hopefully. “Or there will be a very localized apocalypse.”

I am driving to a meditation retreat.

It’s New Year’s Day, and shudderingly cold. I don’t want to be here. I think about my fireplace, and the friends I could be spending time with, and the fact that I am about to be without Internet for five days.

The theme of the retreat is breathing meditation. As soon as I try to follow the instructions, my thoughts, which I’d been drowning out over the past few weeks with parties, sparkly things and bacon-wrapped food items, go to town.

You can’t even breathe properly.

Shut up. You are not welcome here.

Anyone else would be relaxed by now. You’re in this beautiful mountain village, all snowy and peaceful, and you can’t relax. After all these years, you –

I command myself, for the next 30 minutes, come hell or high water, to concentrate on my in breath and my out breath and nothing else.

Except I’m really hungry, and it’s another two hours until dinner time.

Also, what I should call my book? It’s so cold that my hair is freezing. When was the last time I had my roots done? Wow, that little ice-covered cabin reminds me of Game of Thrones, especially that great episode when in breath out breath, goddammit.

What’s happening in Syria right now? It’s irresponsible not to know. I reach for my phone and then remember it’s back in my room, turned off, which it will be for the next three days inbreathoutbreathinbreathoutbreath. I think of my fellow retreatants, all probably sitting blissfully on their cushions, their heads turned towards the sun, their minds thought-free as I storm up and down the same laneway because it’s one of the few that’s been plowed. 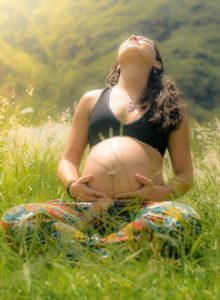 I should just leave – just jump into my car and gun it back to reality, where I can drown all of this out with Netflix, Pinot and to do lists like a normal person. IN BREATH OUT BREATH, KARNEEF. I march back to the house, shake the snow off my coat, curl up on a couch, and take a nap.

Nap-taking (and, for that matter, storming through the countryside) would be frowned upon in some of the stricter meditation traditions, but not here. In fact, Derek, who’s teaching the retreat, has explicitly penciled naptime into the schedule, and suggests that if we pass out in class, not to worry, we’ll absorb everything via osmosis, anyway. I test his theory by falling asleep a few minutes later, my forehead on the floor as if in some devotional yoga pose. I wake up pissed. Classes are my favourite part of a retreat – like university seminars about death, sex, human behaviour and the workings of the mind, plus great stories about traveling with Burmese monks – and I missed most of this one, because I was tired, because I can’t relax, because I’m doing this all wrong.

“I’m going out of my mind,” I whisper to my friend Susan.

Of course. On every single retreat I’ve ever taken in my life, the first three days have been an orchestra of self-judgment, resistance and discomfort. And then, magically, it seems to clear.

One day to go.

To celebrate our last full day, we head to a nearby Nordic spa – one of those places with the saunas and hot and cold pools. Incredibly, the anxiety in my stomach which has refused to fade over the past few days heightens at the idea of it. If I can’t calm my mind on a meditation retreat AT A SPA, I am doomed for life.

We wiggle into our bathing suits, wrap ourselves in spa bathrobes and disperse. I find a hidden hot pool near the back of the property, inhabited only by a couple and a lost-looking bearded man. I climb in and float, trying to feel grateful. After all, there are people all over the world who are hungry, terrified, alone, and here I am, meditating a giant outdoor bathtub.

You are a terrible person.

You are incapable of gratitude.

I climb out of the pool and storm inside.

Lest you are under the impression that meditation is about being free from thoughts, here is a story for you.

A couple of years ago, I was in Australia, surrounded by beaches and beauty and abundance and love, having a really difficult time. My marriage had just ended. I had just come off two months in rural Uganda. I was trying to be in a new relationship. And I didn’t feel like I would ever belong in the “normal” world again. I hadn’t actually met Derek in person yet, but I reached out to him by phone. I gave him the scoop, and he burst out laughing.

I’m not kidding. He laughed his ass off. I could hear him tears wiping the tears off his face.

“You’re going through some of the most stressful things that could happen in a person’s life at the same time,” he said, finally, “and you’re wondering why you’re anxious?”

It was then that he gave me one of the most useful meditation instructions I’ve ever received. Instead of trying to shove Feeling Bad Natalie away, he suggested, why not let her be in the room?

“She can be on the other end of the park bench,” he said. “Or, if that’s too close, then down the street. Just let her be there. You don’t have to do anything else.”

This meditation has saved my sanity many, many times.

Now, in the spa, I face my reflection in the window. Feeling Bad Natalie stares back. There is a knot in her stomach, tension in her spine, and so much shame. She’s a lost cause. She’s in a white fluffy bathrobe, for godsakes.

We stare at each other some more.

It kind of hurts.

Something from deep down says, “It’s not supposed to be.”

I bathe in the unease. I don’t yell at FBN, which, I realize, I have been doing all week. Minutes pass, and I became more aware that as difficult as this is, it isn’t killing me. Thoughts are masters of disguise – they sneak in from different directions and with different agendas and convince us to believe them, again and again. But the more we practice, the faster the instruction comes back. I’ve done this a thousand times, and still, I forget.

Finally, the heaviness lifts. I take a deep breath and go back outside to the hidden pool, which is now vacant. I look up at the sky, and it’s like someone has washed a dirty window. I had completely missed the ice-coated branches of the trees sparkling in the moonlight; the sound of the wind; the deep, black velvetiness of the sky. The spa is about to close, but I stay where I am, now overcome with gratitude, until one of the staff members comes out, doesn’t see me, grabs my bathrobe and heads back inside.

I chase after him, and my friends laugh when they spot me from a window, a steaming blur of skin and bare feet scurrying across the frozen ground. We go back to the house and share a massive dinner, more laughter, and the kind of raw, juicy conversation that happens at in these kinds of environments. And when I drive back home the next day, to reality and phones and normality, I cannot, for the life of me, stop grinning.

I bought this postcard in a dusty shop in Istanbul

Watched all of Netflix? Never fear! The latest ep

For anyone struggling with mental health during th