Yes, love. First of all, you get to stay in people’s houses, see what books they’re reading, meet their dogs, and learn how they cook corn on the cob. But to me, anyway, connecting with a local and getting their insider tips on their neighbourhood or city or beach is the very definition of travel.

I pride myself on my AirBnb skills. Sometimes, I miss the mark, like the woman I stayed in in New Zealand, whose daughter showed unannounced and took the room I’d rented, so I slept on a single bed in the 12-year old son’s room. Which would have been fine if said son hadn’t had hourly screaming tantrums for his mom to cook him pancakes and let him watch cartoons at an eardrum-splitting volume on his iPad, and if his mom didn’t drink wine out of the bottle every night in front of the TV, not that I blame her.

I’ve connected with extraordinary people through AirBnb. I’ve scored a cottage in the Welsh mountains and one in the rice paddies of Ubud. I met a healer in Nelson and stayed in a gypsy caravan in Windsor. But none have been quite as successful as the place I stayed in most recently, in Canggu, Bali. I chose it for the usual reasons: good location, in my price range, pool, canopy bed (duh.) But also, the woman running it, Leannah, is a life coach. And she plays the ukulele.

When I arrived, Leannah was having a meeting with two other girls, all on their laptops… on beanbag chairs, by the pool. One girl leapt up, greeted me with the enthusiasm of a long-lost relative from the old country, grabbed my bag and carried it to my room. She was called Sarah and the third girl said she was called Casha and I got in the pool and we started a conversation that hasn’t really stopped for the past 2 months. 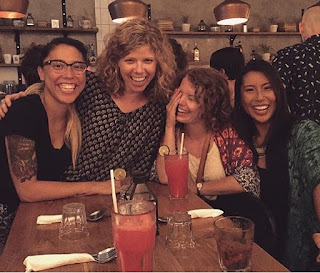 Casha, me, Sarah totally loving one of my jokes, Leannah

Sarah and Casha run these amazing retreats for entrepreneurs and creative people, and Leannah, it turned out, was going teaching something called a manifesto workshop at one that was coming up, which she generously let me crash. In the workshop, we did exercises around where we were in different aspects of our lives and and where we’d like to be. Sounds like common sense, right? Is, in fact, not common sense. You’d be surprised at how many dreams are lurking under the surface, waiting to make their presence known. One of the things that came up for me was that I really wanted to be teaching writing. That, in fact, I had wanted to teach writing for quite some time.

Previous to Canggu I had been in another town, further south in Bali. The folks at the co-working place I’d been a member of there had asked me to do a skill share, which essentially, means to teach a workshop. Do know what I said?

That I’d think about it.

They asked me again.

I said I still needed to think about it.

I mentioned this to Leannah. Leannah said, “I’ll come to your workshop.”

So I would teach a workshop to my buddies. That wasn’t so bad.

The workshop got posted on Facebook. People signed up. People I didn’t know. People from other countries. I made slides and rode around on my scooter mumbling things to myself and rehearsed on my canopy bed. (I know. Rough.) About 15 people came in total, including Leannah’s surfer boyfriend Tim, who is French and thinks writing is touchy feely. 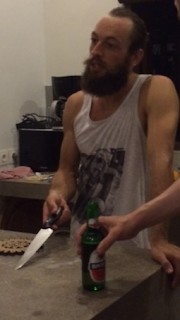 You can tell by how he holds that kitchen knife.

But when I got up behind the podium, it was like breathing. It was like I was doing what I’d waiting my whole life to do.

Leannah said, afterwards, “You lit up.” 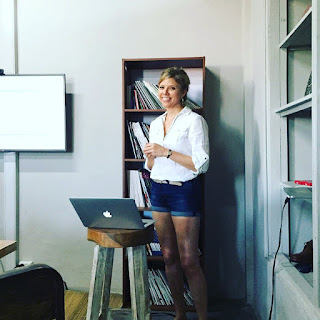 I do look pretty darn happy.

I took on a few clients, and starting coaching writing, one-on-one. I lit up some more. Here is what they said about it their sessions. (I promise, I didn’t pay them to.)

“Natalie is an amazing coach. She has taught me how to tell better stories, and how to create a practice that is enjoyable and sustainable.”

They said I was “empowering, encouraging and real.”

They said, “The tips and tricks I have received over the past two months have vastly improved not only my writing technique and process, but the confidence in my voice and the pieces I publish.”

They said, “I highly, highly recommend Natalie to anyone seeking a writing coach.”

So here we go. A new chapter.

If you need to improve your writing for your job, your business, or your creative path; I can help. If you want to get published, get more clients, or turn up your mic; if you have a story you’re burning to tell, or two or thirty, but can’t figure out how to start or how to finish or how the fuck to actually sit down and get past your internal editor and make it come out the way you want it to, I can help with that, too.

I’ve written for (deep breath): international retail brands, major television networks, national broadcasters and critically acclaimed magazines. I’m an award-winning scriptwriter; and have worked in reality and factual television, documentary, and drama. Two of my personal essays were released in anthologies in 2015, and many more are on the Huffington Post. And to me, writing is meant to be fun and make you feel good. Really.

I’m offering a free 30-minute Skype or phone session to anyone who wants one for the next 30 days. There will be introductory rates for the first 5 clients who sign up for a 3 or 6-session package. Did I mention it will be fun? And uplifting, and it will change not only how you approach the written word, but creativity, work and even life. That’s a big promise! But I’m sticking to it.

To say hi or get more info, write me at natalie [at] nataliekarneef [dot] com.