This morning is one of those mornings. Nothing terrible happens, shit just goes wrong. Then I find out that the friend I’m supposed to meet in Bucharest, where I’m headed today, can’t make it.

At lunchtime, Pietro drives me to the train station, even though I could have walked there in 7 minutes.

“Have a great and long life,” he says, with a flourish.

He kisses me on both cheeks and then disappears. And I stand there on the platform with my backpack, with that feeling that I get sometimes when I travel alone: of being a tiny minnow in an enormous sea, like I could get swallowed up at any moment and no one would know.

Sometimes, I can be a little bit dramatic.

I was talking to one of my Bali friends yesterday, Sabrina, who’s now back home in Australia. She’s had the sads lately and doesn’t know why.

“There is nothing wrong with my life,” she said. “I don’t want to be a downer.”

Do you think I can take this advice myself?

I get on the train into Florence, feeling lower and lower. I want to call a friend, but I don’t want to be a downer. I send out a little prayer to the universe that someone who loves me might check in on me for no reason, even though the universe is probably like, “Girl, god gave you two hands. Pick up that phone and dial.”

Lo and behold, in that moment, a text comes in from my friend Leannah, who’s still in Bali.

Then I add that there is nothing wrong with my life, and apologize for being a downer.

Leannah tells me, in the politest way possible, to fuck off and let her be a friend.

I catch her up a bit, and then tell her about a guy I met on Bumble (for those not in the know – essentially like Tinder, except girls have to send a first message.) I’ve been chatting with him for the past few days, and there is even the possibility of (gasp) meeting up. He is cute, friendly, intelligent, and a traveler.

I have no issue with dad jokes. I find them kind of endearing, when done properly. But this guy takes it to a whole other level. For example, knowing I was flying out of Bologna today, he made a joke about baloney.

“I can’t go out with a guy who makes jokes about baloney and Bologna,” I say to Leannah. “Can I?”

“Depends how big his bologna is.”

I burst out laughing. The very serious elderly Italian woman sitting across from me raises her eyebrows. I start laughing harder, and her very serious husband gives me the side-eye. Now I can’t stop. The more people start looking at me, the more I giggle like a 12-year old. We bring Sabrina into the conversation.

“He seems harmless,” Sabrina proclaims, once I fill her in.

“He’s read all the Game of Thrones books,” I tell her. Sabrina is a huge fan.

“OMG! Can he speak Dothraki? Definitely sleep with him if so.”

As I get off the train in Bologna, I send them his profile photo. I liked it especially because there are goats in a field behind him.

I’m stunned. Sabrina and I usually have similar taste.

“It’s the way he’s looking at the camera. Trying to be cool with those llamas in the background.”

There is a pause as, presumably, Sabrina looks at the photo again.

“Maybe he’s saying, ‘Hey girl, check me out with these llama-goats,'” Leannah says.

This makes me double over on the platform, backpack and all.

We all chime in about how much we miss each other. Then we say our goodbyes, and I head out in the rain to find the bus to the airport, still laughing.

There is so much calm and positivity that comes from sitting with the shitty feelings, rather than distracting yourself with Facebook or texting or any other number of ways we can tune out. We learn this, in meditation. We learn it the hard way, boy. And I know, from experience, that it works.

But it was also a meditation teacher who told me that we’re not supposed to do this alone.

This whole life thing, I mean. We’re supposed to reach out when things get shitty, even if they’re not that shitty. Even if there is “nothing wrong”. Not to whine, or to blame, or to be negative. None of that works. But to commune. To say, hey, I’m not so great, so the other person can say hey, neither am I, or hey, I still love you. 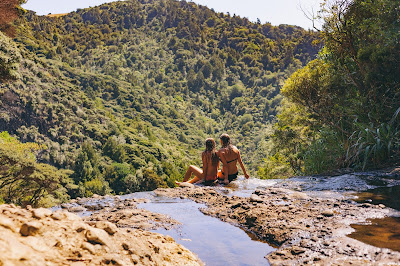 So when to reach out and when to stay still? What’s the fine line between mindfulness and stoicism? I don’t know the magic formula. Maybe I never will. All I know is that today, no one tried to make anyone look on the bright side. We were just real with each other, held space for each other, and laughed. Three women – one on a train to Bologna, one in a parking lot in Canggu, and one on a couch in Perth – brightened up each other’s days. Mine especially. I’m grateful for the technology and the circumstances that led me to be able to reach out to them.

In the end, traveling solo, as exhilarating as it can be, is not entirely natural. We’re meant to be in tribes. Human are pack animals.

And so, for the record, are llama-goats.