I had to stay home and work today. Someone’s gotta be productive around this place.

Maria and Pietro were out all day, including for both lunch and dinner (gasp!), so I was left to my own devices. Sort of.

“You take food from the fridge,” Maria commanded, before they left.

But out of a desire to be at least somewhat self-sufficient, I walked into town at lunchtime and bought a few groceries. The sun came out from behind the clouds, and I passed an old man who exclaimed, “Bongiorno, segnorina!” to a little girl on a sidewalk, proving once again that Italy exists on a different dimension than the rest of the planet, and making me wonder why, given the choice, anyone would want to live anywhere else.

At the supermarket, the cashier asked me something. I cheerfully told him no parlo italiano, and he cheerfully spoke probably the only English he knows, and we said goodbye, laughing. I passed a man walking a miniature schnauzer, and I squealed and showed him a photo of Ruble on my phone, and he was seriously thrilled. (The man, not the schnauzer. Who had a much fancier hairdo than Ruble, but as he is Italian, this should not come as a surprise to anyone.)

I went to the post office to mail a package. The woman behind the counter knew no English at all, but somehow we figured out the price of the postage, and that it was going by regular post. As I walked home, I thought, again, how I should just stay here. Maria and Pietro have even offered that I could hang out while they’re away for the winter. I’d get Ruble over and call him Rublito, and we’d sit in my little loft and look out the fog and write. And probably gain a few hundred pounds, because after 3 weeks of being here, I now feel, like the rest of the nation, apparently, that unless it’s got bread and cheese in it, it ain’t food.

Then I came home and cooked for myself for the first time in almost 2 weeks. (I know.)

I am a terrible cook. Ask any man I’ve dated or person I’ve lived with: I suck at making food, and also, I hate it. Baking is a different story, because that’s about dessert, but actually being inspired to put a meal together is not in my DNA. This is probably why I have so many friends who happen to be fantastic in the kitchen.

It was then that I realized, really and truly, how well taken care of I’ve been since I arrived in this little town. It’s not just the food, although that’s a big part of it. (Side note: yesterday, Maria gave me her tiramisu recipe. DID YOU HEAR THAT? I will never be husband-less again. Just kidding.) It’s the love that came with it. It’s having people who knew when I came and went, who cared where I was, and who wanted to know who I was. This is what I’ve missed, as a traveler, but I also know there are a lot of people who aren’t traveling and who still don’t have it. There is no substitute for having people. It doesn’t matter how happy or self-fulfilled you are.

I knew I needed to come to Italy. I wasn’t sure why. I wanted to see beautiful things and visit beautiful places, and maybe have a fling with some handsome man on a vespa – well, not actually on the vespa, he’d be riding… never mind. Anyway, I thought I’d have some kind of Audrey Hepburn experience, staying out late and flitting around the rooftop bars of Tuscany like the young and carefree thing that I am.

Instead, I came home almost every night and had dinner with a couple in their late 60s. And I wanted to. In fact, most nights, I couldn’t wait to sit down with them, and not just because of the food. Because of the warmth. Because of the sharing and the appreciation, the open-mindedness and the extension of family. Because I got to be like a grownup here, but get taken care of like a little kid.

Which, in the end, was what I exactly what I needed. 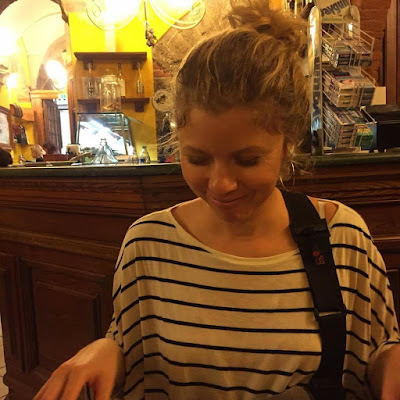