I am like a teenager in this house. I woke up at 10 today – I can’t remember the last time I did that. I stumbled down for breakfast, whereupon Maria asked me if I knew what Nutella was, since she puts it out for me every morning and I never eat it.

“I know what it is,” I tell her. “I just don’t want to leave here this big.” I make a gesture around my stomach and she laughs.

But in all seriousness, the fact that I can still fit into my pants on is a miracle.

I do some work, and then some research about stuff to see in and around Florence, and before I know it, she’s calling my name again for lunch. I had planned to be gone by now.

“It’s the same,” she says, when I tell her this, apologetically. “For two people or three people, it’s the same.” There is crostini – toasted bread with liver pate – and buffalo mozzarella, and fresh tomatoes in olive oil, and gorgonzola. And a fresh apple cake she’s just made, which is so tender and delicately flavoured, I want to get down on my knees and cry.

I’ve been saying that a lot, lately, about food. I think it’s Italy.

Afterwards, I take a bus to the small village of Fiesole. Lonely Planet claims it was a favourite of Gertrude Stein’s, Marcel Proust’s and Frank Lloyd Wright’s, so it’s good enough for me. Fiesole is up, up, up, and home an Etruscan temple, Roman baths and a Roman amphitheatre, and an adjoining museum. Because it’s raining and off-season, I have the place basically to myself. 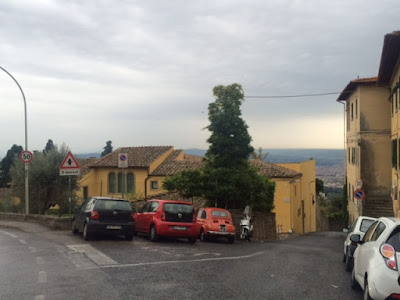 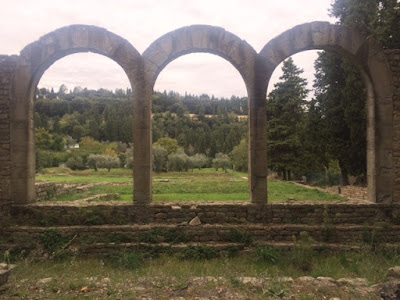 I wander around for a few happy hours. I visit the church, which is almost totally dark, and sit in the quiet. Then I buy Maria a bouquet of flowers in my ongoing bid to somehow show my appreciation for all the food, and order a glass of chianti while waiting for the bus, like the local that I am.

It’s so good, I want to get down on my knees and cry.

I return home. Maria gives me a lesson on how to make pizza dough. 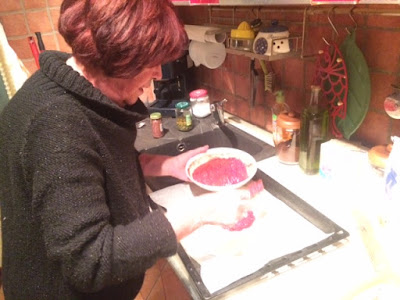 We eat dinner (do I need to tell you how good it is?) and talk about the church at Fiesole. None of us are especially religious, but, Pietro says, he likes to stop in at the local church in the town here.

“I say hi to Jesus, then to Mecca, then to the Jewish people,” he says, making a gesture East, South and West.

“Is like talking to the dead people,” Maria laughs.

They are off to play bridge, during which, they explain, they remain on separate teams.

“Is that the secret to a happy marriage?” I ask them. Pietro nods, grinning.

They’ll be back at one in the morning, they tell me. Help yourself to anything in the kitchen.

And off they go, together, still laughing, while I get ready to go to bed, a little bit happy, a little bit sad, and very, very full.