I wake up this morning at Ella and Ingvar’s to screaming, thumping, dishes clinking and the smell of coffee. I go back to sleep. When I wake up again, there is silence.

I wander around the empty house, drinking tea, catching up on work, and reveling in the spaciousness and the wood flooring, getting overly excited about mod cons I haven’t had in so many months. Drinkable tap water! Sweet potatoes! A compost bin! Cheese! I gaze at wedding photos and pictures of the kids, and remember what it felt like when I thought I was on my way to this life, or at least something like it. I thought about what it would feel like to have it now, to have someone to have it with, someone good and kind who worked with me they way Ella and Ingvar work with each other. And for the first time in a long time, I want it. The roots. The stability. The sense of belonging. I want it so much that it stops me in my tracks, and for a few minutes, I can do nothing but sit there and want it.

But do I? Or is this just a reaction to my absolute and total lack of those things? My plan, even as a little girl, was always to fall in love, get married and have a family. But for the last few months, I’ve reveled in my freedom, my rootlessness, my almost total lack of responsibility. And yet.

There is no real category for what I do right now. Most of the time, I love that. Sometimes, it feels really strange. I am a digital nomad, but very few people, aside from other digital nomads, know what that means. If I were a guy, I’d be a roving bachelor. It’s less acceptable, in our society, to be a roving bachelorette. I imagine myself being in these shoes forever, and wonder how Ella and Ingvar’s kids will see me in a few years’ time. As if to illustrate this point, I look at the counter, and see that the key they’ve left for me has a cat on it.

Later, I take a walk around the neighborhood. It’s like a fairytale, here – red and green houses with rounded roofs poking out of forests, everyone tall and blond and riding bicycles. 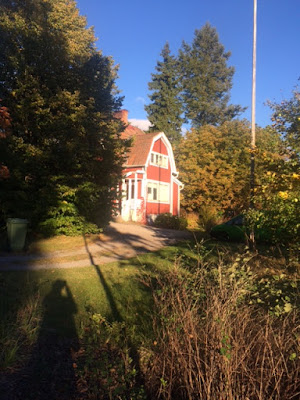 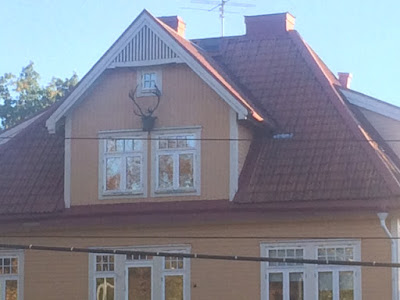 I could live here. Ella and Ingvar have been half-teasing that they’re going to find me a Swedish man. I could work a 6-hour work day and have the free childcare and the shiny newness. I could learn Swedish! But that’s my thing. Whenever I arrive somewhere, I want to stay forever. When you fall in love, there is no baggage. There is no history. Everything is an adventure, until it’s everyday life.

There is a dinging behind me, and I turn around, startled, to see a cyclist. She rolls her eyes and shakes her head as she whizzes past, as if moving her bicycle a foot to the left is the biggest inconvenience imaginable. Yesterday, at the airport, a man scowled at me for accidentally nudging his foot with my baggage cart, even after I apologized three times. It was the first time I’d seen a scowl in as long as I could remember. I’d forgotten what it felt like to be in a place where everyone is in a hurry.

I return home to screaming, thumping and clanging. The godson is shoving an entire tortilla into his mouth. The Blob is demanding avocados. The Newest moves a chair across the floor the counter, climbs on top of it to eat a pear, then stands in the middle of the kitchen, takes off all her clothes and sings the Star Wars Imperial March at the top of her lungs. 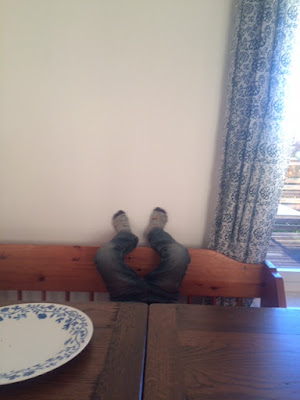 My godson, at dinnertime

I have a client who is happily married, has three kids and lives in a beautiful house. She told me, once, that I’m living her other life. I told her she’s living mine. My friend Susan, who’s 74, often shares how close she came to not having children, and how she sometimes wakes up in the middle of the night, horrified at the thought of her son not existing.

For the past three years, I’ve tried to convince myself that one life or the other has more perks. Lately, I’ve been starting to think that maybe both paths have just as many pros and cons. One is just the one we’re told we should have.