Yup, that’s how I roll: wake up in Cappadocia, go to sleep in Stockholm. At 10pm, if I make it that late, because I’m staying with friends who have 4 children under the age of 6.

I’ll pause for a moment to let that sink in.

I’ve written about the Swedes, aka Ella and Ingvar, before. Their first baby, Nils, made my heart grow three sizes. Then their second, The Blob, did it again. Their third is my sweet and gregarious godson, whom I met in 2013. Since then, they’ve had the Newest Addition. She’s just as adorable as the rest of them, and has already become quite proficient in perusing Tinder.

“Dah!” she shouts, for the good ones.

“Nah!” she yells, for the ones who do gym mirror selfies.

I couldn’t not visit the Swedes. For starters, Stockholm is such a cheap flight away from Turkey. Although I always have amnesia about cheap flights. I climb off one, shaking, starving, freezing, sweating, fearing for my life or all of the above, and swear up and down that it wasn’t worth it and I’ll never do it again. But then I start planning a trip, and… What? A flight to Timbuktu for $5? With no baggage allowance, meals, seats or toilets? I’ll take it!

Considering that, my first flight today was pretty good. Aside from the fact that the flight attendant took my water bottle away while I was asleep. But, upon takeoff and landing – in a Muslim country – they played Christmas music on the loudspeaker.

But now I’m here, in suburban Stockholm. We’ve just had dinner, during which The Blob (no longer very blob-like) did pushups on the kitchen bench, the Godson split eardrums from atop the table, and the Newest Addition ate her water out of a glass. With a knife. She also made me put on and take off her Cars watch 70 times, on different parts of her arm. My godson has just wandered into the living room wearing a giant fluffy bathroom. The Blob is in his underwear, which is one item of clothing more than he generally likes to have on. Only Nils is sitting quietly, playing a board game. I’m pretty sure he’s going to be an accountant.

Despite the deafening chaos, there is so much peace in this house. There always has been. No one makes a big deal out of much. There are a lot of laughs and, while the kids have rules to follow, they are encouraged to express their own individuality. 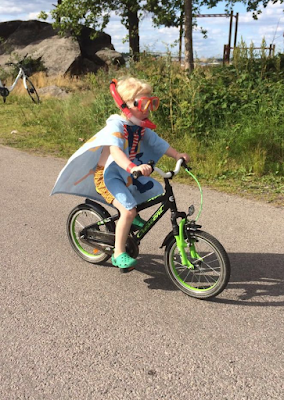 The Blob, dressed for winter

Plus, everything sounds nicer in Swedish.

We were talking about Facebook over dinner. I was saying that to me, the blessing about Facebook is how much easier it makes it to stay in touch with the people you meet when you travel. And it occurs to me: that’s the thing about travel. Sure, you can climb the highest mountains and see the most ancient ruins and have your mind blown by the most radiant sunsets. But 75% of it, maybe more, is the people you meet. The travel friendships that last across space and time. The thrill of meeting up again after a year or 3 or 13. There a sense of goodwill among travellers, a tolerance and understanding for people and their differences. We are so privileged to have these experiences and grow from them. It’s a gift I wish I could share with the whole world, and I feel blessed to be sitting in this living room, this family doing their thing around me, as if I were here every Sunday night.

So that’s me for now. I have a Cars watch to take off and put on again.

With love, cinnamon buns and lots of sweaters on,