So I went to the hospital this morning. I had to explain myself multiple times: first to staff at my hotel, then to the translator, and then, obviously, to the doctor.

“What happened?” they asked.

I so badly wanted to say that I was crawling through a tunnel in the underground city and fell into a pit of vipers and managed to escape with just a swollen ankle.

So they put me in a wheelchair. 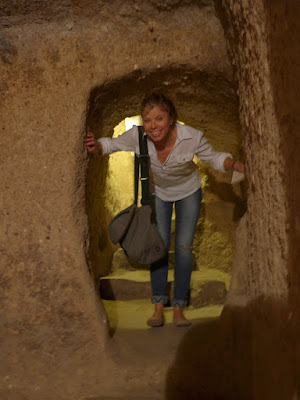 The pit of vipers was just to the left.

I have been running these past few weeks. Not, like, jogging, but moving fast. In really enjoyable ways: traveling with Tegan, getting to Cappadocia, hot air ballooning yesterday, and then an extraordinary guided tour. I’m here to write a piece so I’m getting the star treatment, but my god, I will never turn up my nose at the idea of a guided tour again. I got to showed around one of underground cities, which were safe havens during battles over a thousand years ago. I saw churches inside fairy chimneys, and was told the stories behind the ancient paintings on their walls. I had the best meal I have had in Turkey, period. 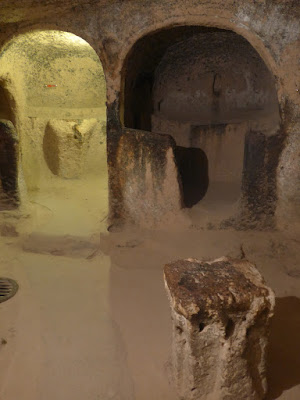 Church in the underground city 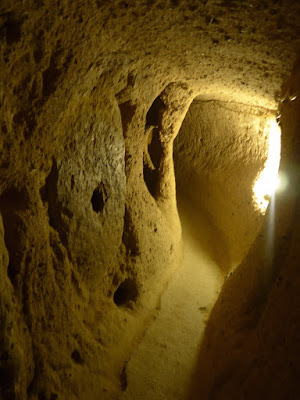 Tunnels between homes. Not for the claustrophobic! 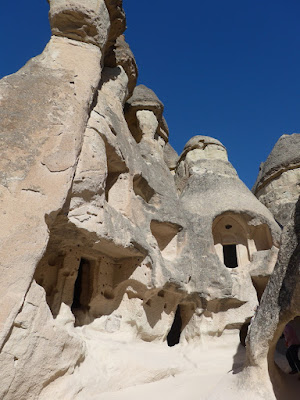 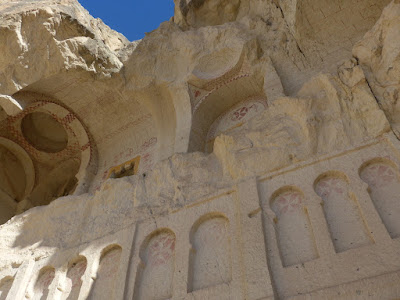 And then I came home, and, while trying desperately to relax, ended up oh-so-gracefully banging my ankle against a marble floor. And since there is more running to come and I couldn’t actually walk, I thought I should probably get it checked out.

It’s nothing serious, thank god. I just have to lay off it for the next few days. But it was also like a flashing, neon sign: Karneef, for godsakes, STOP.

Travel can bring you more into the present. It can, just as easily, distract the shit out of you. There can always be something more to see, something else to jam into a day, some other once-in-a-lifetime experience to have. It can turn into just as bottomless a rabbit hole as work, or the Internet. And I don’t about you, but when I get revved up, I crave Internet. If the socializing and flying and blogging and working weren’t enough, I’ve been on social media far more than I’d like to be.

“Turn it off,” said my common sense.

“But I need to know everything that’s happening ALL THE TIME,” said my brain.

But I knew what was going on. Because I’ve been here a thousand times before. Not here, Cappadocia. Here, anxiety. And hurtling around at top speed in an attempt to ignore it.

Writing, for me, is about connecting. But at the same time, I worry that a byproduct of this 30-day challenge is that I am contributing to the noise and distraction that, I believe, is making us more disconnected, more over-stimulated, and generally unhappier. So instead of writing any more today, I’m going to go be quiet. Consider this an invitation to join me. Let’s put down our phones or tablets or laptops and just be for a while. Let’s just sit, or just walk, or even just eat. Even if it’s just for five minutes, rather than adding to our to do list, let’s be there for the parts of yourself we’re trying to run from.

If you’re still craving distraction after that, I highly recommend this article.

With love and quiet,