When I first spoke with Nyaka’s founder, Jackson Kaguri, about coming here to volunteer, I raised what I thought was a pretty important point.

Obviously I didn’t mean it in an absolute way, but in the sense of skills they might need in a developing country. I don’t know how to build houses or cure diseases. But was I really going to come over here and do good, just because I’m… educated? Liberated? White?

Jackson explained that the Nyaka blog needed more stories about the school, the people who run it and the community members it affects, and that they’d love to have a writer here to do that. I was happy to oblige.

“Was there anything else you’d wanted to do while there?” he asked.

The truth was, I had this fantasy of myself turning pages to rapt audiences of students, igniting their imaginations and inspiring them to tell their own stories, just as I was when my teachers and parents read to me. But I also knew that these kids were dealing with problems that, at that age, weren’t even close to my radar: losing parents and family members, poverty, disease, unimaginable obstacles. It was hard to believe that story time is what they really needed.

Jackson explained that Uganda isn’t really a nation of readers, and that bringing my love of reading to the kids would be of huge benefit. I still wasn’t convinced, but in the spirit of my “skill,” I packed a huge suitcase full of books for the library, all donated or paid for by friends and supporters. I chose some of my favourite childhood books, as well as a bunch written by African authors that discuss issues facing African kids. I also brought the first four Harry Potter books. I’d read the testimony of a teacher who read the first HP book to her students, and how, when Harry made Gryffindor win the Quidditch Cup, the kids cheered and hugged each other. The story brought tears to my eyes. But also: Hogwarts? And Nyaka? How do you put those two ideas on the same planet, much in less the same library?

Last week, I went to meet the Primary 5s and 6s, who are between about 11 and 14 years old. Armed with what I hoped was a worthy literary selection (no Potter included,) I nervously made my way to the front of a classroom. The kids welcomed me, in unison. Then they looked at me as if I were from outer space. One of them handed me a piece of chalk. I wrote my name on the board, and then, “CANADA”. We all looked at each other some more.

Finally, I pulled out the books, described the plot of each one to the kids, and asked which one they wanted me to read. They chose a story about going to hunt monkeys, and another about a Ugandan girl whose family receives a goat. I humbly report that both were a hit. Every time I turned a page and showed them a new picture, they were riveted. I mean video game, iPhone, IMAX 3D riveted, even providing enthusiastic sound effects. And after I finished each book, they clapped. Which is a tradition here, but still made me to turn away and wipe my eyes, which obviously had gotten some dust in them or something. 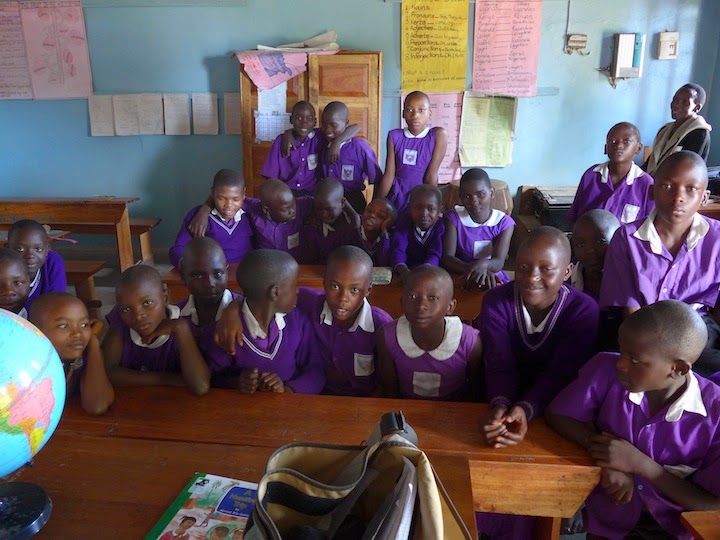 The P6s were much more advanced than the P5s (proof of what an incredible job Nyaka is doing,) and wanted to read for themselves, so I had them form small groups. Watching them pour over each page, reading in unison, making notes and then eagerly summarizing the stories afterwards, was one of the happiest hours I’ve spent here so far. I’d forgotten that stories can hold just as much power as reality. Maybe, sometimes, more. 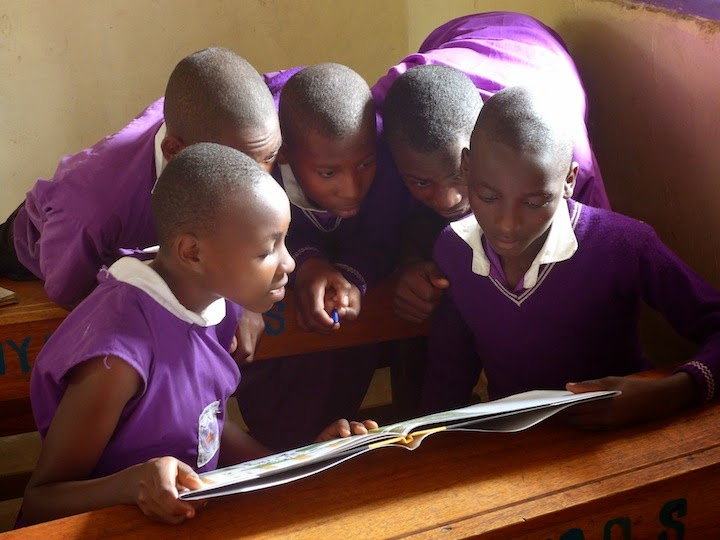 But Harry Potter still flew in on his broomstick, all the way to rural Uganda.

When I was working with the high school students during their holidays, I did a video blog with a 17-year old boy named Bashir. Bashir shared, as many of the kids did, his educational aspirations, and the obstacles he was up against. But in the middle of shooting the video, he paused.

“Will you give me some advice?” he asked, shyly.

Naturally, my Imposter Syndrome set in right away.

“I haven’t published a book or written a film that’s actually a film yet,” I warned him, as if there were a selection of celebrated screenwriters at a bar just down the street.

High school students in Uganda always board, so we only had a couple of opportunities to speak before he returned to his studies. I started with a big pep talk about how, even if he didn’t make it to film school (which isn’t looking promising, given his financial situation,) he should try his best to get a camera and something to edit it on. I told him about YouTube, and Indiegogo, and how so many filmmakers these days are starting from nothing.

“You might have to back up a little bit,” he said, “and explain to me how the Internet works.”

The next time we met, we talked about how important movies are, especially documentaries, to tell stories that might not otherwise be told. I told that lots of people who make films, even famous people, didn’t finish school or even go to school. We talked about how many stories in Uganda need to be told, and I told him about 5 Broken Cameras and War Dance, both of which really impressed him. I explained, as best I could, how festivals work, and we discussed what kind of films he wants to make.

“I like stories where the ending isn’t predictable,” Bashir said. “I was in the library, and I saw those Harry Potter books. I loved those movies so much. I wish I weren’t going back to school right away, so I could read these books.”

“Well, maybe you can find them at your school library,” I suggested.

He looked at me a bit strangely.

“This is the only library in the district,” he said.

Which means next closest one is 4 hours away by car. If you happen to have a car.

He told me that his father had decided, just that morning, to stop paying for his school feels after this year. He wasn’t sure how his mother will pay, but he was pretty sure they’re going to get divorced.

“It’s okay,” he said, in that same, uncomplaining way I’m starting to get used to, here. “I’ll get over it.”

It was then, as strange and unlikely as the words seemed, that I knew what I had to say. Because I was no longer the 37-year old white woman who writes and knows-some-things-but-not-other-things. I was the kid whose parents also split up. The kid who was told for so long that she should be so many other things, but who really just wanted to write and make movies.

“Bashir,” I said. “You must never, ever give up. I know that sometimes it’s hard to when you don’t have people who believe in you. Sometimes people would rather believe in someone who wants to be a doctor or a lawyer, but filmmaking and storytelling can be very important.”

Bashir looked down. “It’s true that I don’t have someone to believe in me,” he said.

“Well, you’ve got me,” I said, and meant it. “And you’ve got my husband.” (Bashir knew by now that Tony is a filmmaker.) “And he believes in you, too. So now you have two people.”

He went quiet for a while.

He said, “Life is amazing. Last week, I was just a lonely, only child, with one parent who works and the other who’s always away. I didn’t have many people to talk to. Then, by chance, I come here to spend the holidays with my grandparents. And I found this library, and I met you. And now I have a vision.”

“I want to say thanks, but that doesn’t seem like enough.”

Since I had something in my eyes again, I told him that I was the one who was honoured to have met him. And how now it was his turn to go make a difference to other people.

“I don’t know if we will ever see each other again,” he said.

So we made a plan. It might not be in a year or two, I said, but in five or even ten, he’d be at a festival and I’d be at another festival nearby, and we’d meet up. I know how far-fetched that, and any of this, might sound to anyone who knows anything. But I also knew that Bashir has no choice but to believe. And maybe, neither do I.

We shook on it, and then he walked off down the dusty road, back to his life and his school, where there’s no library, and no Internet, and no Harry Potter. And I sat there, knowing that if nothing else I do on this trip makes any difference at all, this last hour had been worth the price of admission.

And being very glad I was wearing sunglasses.

Postscript:
I promised Bashir that when I get home, I’ll mail a copy of Harry Potter to him at school.

But that won’t be for at least another 6 weeks. If any one of you has an extra HP lying around and feels like making a huge difference in an awesome kid’s life, let me know. I’ve got the address, if you’ve got the postage.