I’m not at all proud to admit this, but a few days after I landed in Uganda, I was feeling sorry for myself.

That’s right: the white girl living in the guesthouse with windows and floors and someone bringing her food – the Canadian without HIV or AIDS and with access to education and free healthcare – was moping.

Even more embarrassingly, it started after we went to visit some of the grandmothers. These women are supported by and given micro loans from Nyaka, to increase their crop yields or buy farm animals, and to make additional income to pay their grandchildren’s school fees. I rode out to see them on the back of a motorbike, driven by a lovely guy named John, because that’s the easiest way to get around these parts. At first, while a bit white-knuckley, it was pretty awesome: zooming past lush, rolling valleys and fields, waving at kids who yelled, “Muzungu!” (translation: white person, in the most un-racist of ways,) the wind in my hair. (Nope. No helmets. I’ll pause here and let my father pour himself a drink.)

The grandmothers were amazing – so resilient, and so determined. One of the granddaughters ran out to meet us, grabbing my hand and dragging me towards the house as if to say, “Finally! What took you so long?” I wanted to pick her up, jump on the motorbike, take off and not stop until I got to Montreal. 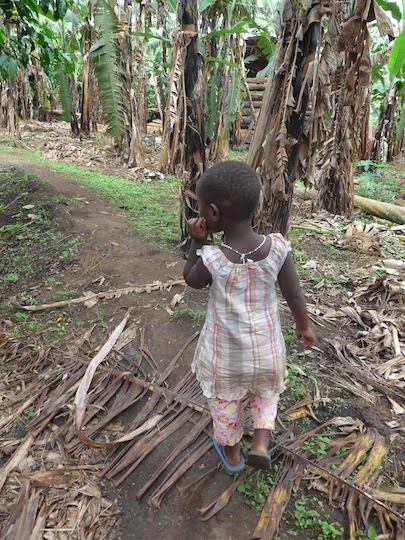 Her grandmother told us how Nyaka gave her training to take care of this little girl and her 3 siblings, all of whom are “vulnerable.”

“What does she mean by vulnerable?” I asked John, fearing the answer.

We visited 6 grandmothers that day. Some still have living sons and daughters, others don’t. One gave birth to 16 children and lost 15 of them.

They showed me their homes, their kitchens, their toilets. And by the way, I’m using flash in the first two photos. Not much light gets into these places. 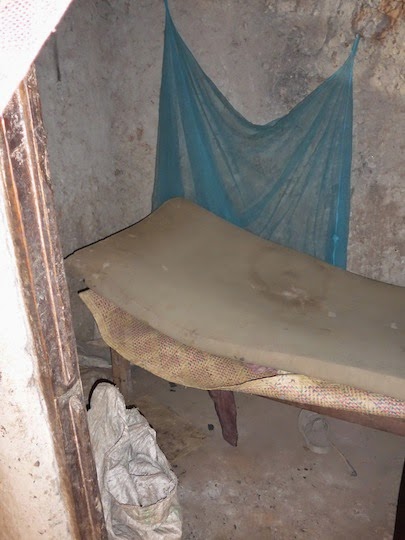 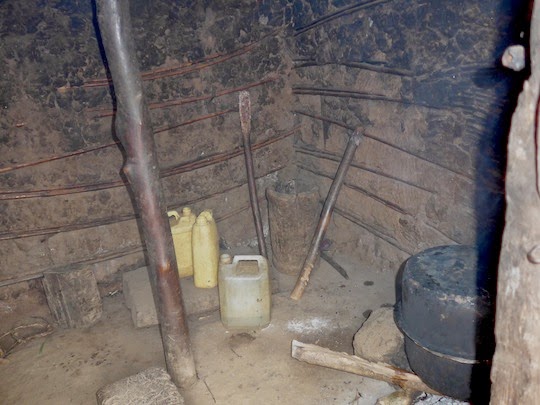 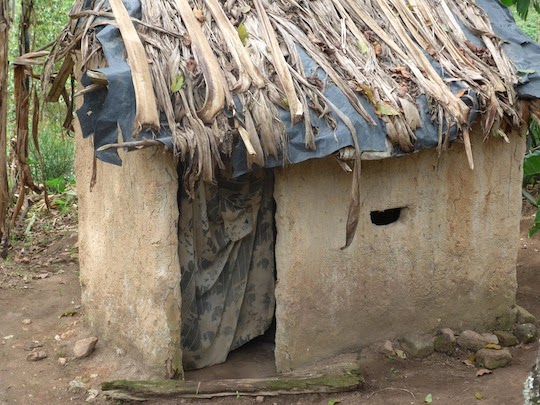 On the way home, my mind went to Martha Stewart Living, and Better Homes and Gardens, and Design Sponge. I didn’t know what to think. Nothing made sense. When I got back to my room, I googled flights back to Montreal.

Not in a serious way. I really can’t tell you why I did it – I didn’t intend to follow through. Compared to the people I met that day, I might as well be Marie Antoinette. But, as ashamed as I am about it, that I night, I just wanted to run away.

The next day was Friday. A whole weekend ahead. Time for the fog to lift, and for me to get some perspective. Right?

A guy I had a meeting with when I arrived in Kampala – let’s call him George – was in “town” that night, and had asked me to meet up. I checked with the woman who runs the guesthouse, and it turns out that, since I’m the only person here, I can’t actually be out past 8pm or there won’t be anyone here to let me in. I told him this by text, and invited him to come by for dinner instead.

Well, George got pushy. Like, inappropriately pushy. Like, suggesting-I-spend-the-night-at-a-nearby-hotel pushy. “Be adventurous,” he texted. “Be open-minded.” I told him that being on my own in the middle of nowhere, rural Uganda, was adventurous enough, thanks. He wouldn’t let it go. It got dark and he got pushier, and I started to freak out, especially as there really was no one I could call and say, “Hey, some dude from Kampala is being kind of creepy, would you mind coming over?”

I texted him and told him, in no uncertain terms, not to come to the guesthouse tonight. While he’s not affiliated with the organization I’m working with, George knows the people who run it. Plus, every other man I’ve met here so far has been nothing but respectful. I couldn’t imagine he’d insist after that.

It got creepier. I started sending him texts in capital letters. I called a woman in Kampala, who works for Nyaka and whom I’ve been in contact with since the beginning. She was stunned, completely apologetic, and called George immediately. She called me back and told me that he wouldn’t be bothering me again. She must have called some other people too, because the cook came by and informed me, to my great relief, that there’s a security guard on duty outside the guesthouse 24 hours a day.

Still, I put down the phone, and started shaking. As some of you know, while traveling alone in Greece 9 years ago, I was raped. What followed were the loneliest, most horrible few days of my life, and I was right back there again, feeling utterly insignificant, unhinged, furious, helpless. And with no one to complain about it to. I wanted to crawl out of my skin. I had dinner, and put on a Hollywood movie about a happy blond family living the American dream. (Hint: if you ever find yourself freaked out in middle of Africa feeling homesick and dogsick, never do this.) But I couldn’t stop shaking. I want to jump on the next flight home, but knew that even if I did, it won’t change much. That’s the thing about solo travel that’s so awesome, and so shitty: you’re totally free. And you can’t escape.

Saturday, I learned that going for a walk around here means the little kids hollering “Muzungu!” and “how are you I am fine!” as I pass, and the adults staring.

It’s not personal. Seeing me here is the equivalent to residents of Idaho seeing one of those blue Avatar aliens land in the middle of town, but as a dyed-in-the-wool introvert, I really just wanted to disappear. I smiled and waved, and they’d smile and wave back, which sounds really nice but just made me feel more awkward. 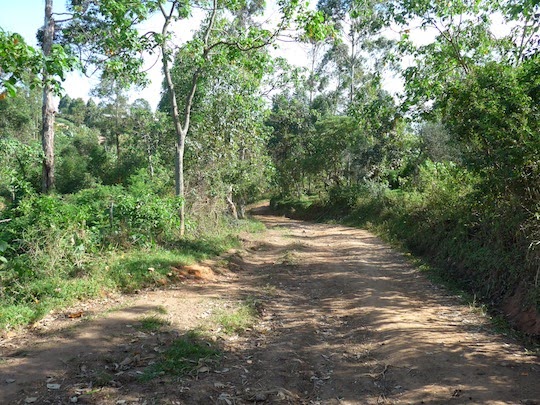 A rare stretch of road with no one on it

Sunday, I tried to escape by spending the afternoon at the nearby hotel pool. I’m sure you can guess how well that worked. More smiling and waving, then the pool boy asked me to sponsor him, which I’m actually not to allowed to as a volunteer, but that didn’t make me feel any better about saying no. Walking home smiling and waving, and also now wet-haired. I kept seeing myself through their eyes: the muzungu who’s here to “help,” coming back from the fancy pool in the fancy hotel we can’t afford to visit. Coming from a place with paved roads and flush toilets and rap videos – a place where, if everyone spent a month or two not buying laptops and $200 shoes and 3D television sets and going out to restaurants that have waiting lists, could pay to educate their entire country. A place where most people feel that eating the same meal twice in the same week is “boring.”

Why did they want to say hi to me at all?

I couldn’t get it out of my head that I shouldn’t be here. That I should just have sent money. That’s what they really need, isn’t it? Money for schools, money for education. Not another muzungu.

I googled flights again that night, wondering if I could leave after 7 weeks instead of 8 and not feel bad about it. And then, finally, the realization finally came. 7 weeks or 8, I’m the one who gets to fly out of here.

I’d been making it all about me.

The fog began to lift.

My “bosses” requested I have the high school kids write posts for the Nyaka blog. So, after explaining to a group of them what a blog is, and then what the Internet is and that it can be used for more than just Facebook, they started putting up their hands and volunteering to write. They wanted to write about Nyaka, about their lives, about the problems facing Uganda. I thought they’d bring me a handful of ideas the following day, but within a couple of hours, I had a stack of handwritten pages. Some of them submitted 2, 3, even 4 pieces. There were poems, odes, reports about Nyaka’s use of solar energy, and stories so heartbreaking I was at a loss for words.

I sat with the students one by one, and we discussed and edited their submissions. One girl wrote about how first her father died of AIDS, then her mother, and how her grandparents likely won’t be able to continue covering the costs of her school fees. A boy wrote about how his dad kept marrying other women and abusing his mother, who finally ran away. He doesn’t know where she is, and his father threatens that if he goes looking for her, no more school fees for him. Another girl’s father married a second wife, who then poisoned the girl’s mother, and her older siblings.

Correcting grammar and spelling on these stories was one of the most surreal things I’ve ever done. I kept saying, “I’m so sorry,” which seemed absurd, and they’d lower their eyes and nod, like, Hey, what can you do? Then, the girl who lost both her parents handed me another piece of paper. It read:

Hope your feeling good with the situation in Uganda.

I am greatly very happy on behalf of all of us you’ve tried to approach. I rilly thank you because you coming into Uganda shows that you rilly have love for the people of Uganda.

I personally kindly request you to become my role model because I have at least observed that you’re a caring, loving, mindful and a time manager (editor’s note: ???) of which these are characters I want my role model to be having.

Natally I pray to God the Almighty to bless you abundantly. Thank u.

N.B.: Greetings to all your friends and parents.

I got home that night, and went for a run around the basketball course in front of the guesthouse – something that never fails to elicit strange looks from passersby. Some of the kids actually climbed trees to laugh at me. To people who walk barefoot through fields all day, this white lady running around in circles must be beyond ridiculous. But I laughed with them, and waved.

Later, I turned out the lights and couldn’t figure out why it was so bright outside. I opened the curtains and saw that the moon was almost full, so I went outside and sat on the porch, something I’d been to paranoid about malaria to do so far. You could almost have read a book by the moonlight, and the sounds of the birds, the crickets and the cow across the street, who apparently sees herself as the town clock, were otherworldly. 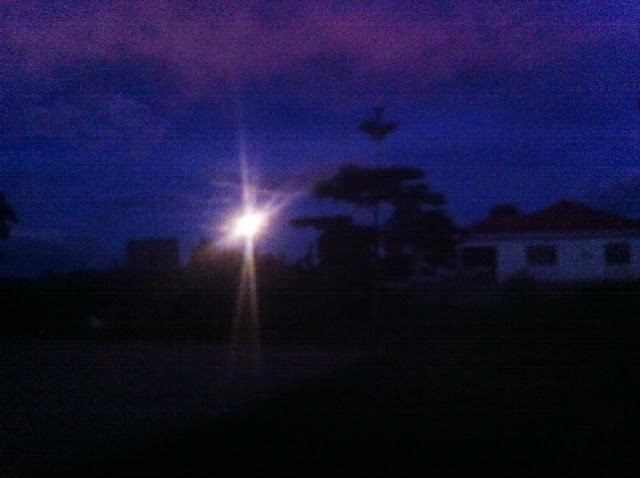 I tried to think of a word for how I was feeling. It wasn’t giddiness or elation, like being in love. The closest thing I could come up with is “full.” Like I’d stepped beyond the borders of myself. It was such a gratifying, intense feeling that for a second I caught myself wondering if it should be legal.

I know the fullness is going to come and go over the next two months. I’m just grateful to have found it at all. I will still feel lonely, and probably like I’m not making any difference, and sometimes, though I really hope not, sorry for myself.

And then, in a flash, two months will be over.

We time managers know about such things.