I’d forgotten how time changes when you travel. How seemingly more than 24-hours can be packed into a day, and how morning can feel like another country by evening, even if you haven’t moved. I’d forgotten, too, how much more aware you are of the unexpected – how one event can impact everything that follows. How when you look back, the best parts of the trip were the parts you couldn’t have possibly planned.

For example, it’s my second day here, and I’m crossing the equator with Miss Uganda.

I arrived in Kampala late at night, less than 48 hours ago. The taxi driver was waiting for me at the airport, holding up a sign with my name on it. We drove through dark streets lined with shops that looked like they were on a construction site – everything seemed corrugated, and many of the business names were painted or spray-painted right onto the wall. There were bars full of men, sitting around at tables lit only by candles. Some barbershops were up and running, even though it was midnight, and the air smelled like India: that burning smell which always takes me back there, and will now take me here.

As we drove along, passing high aluminum fences with barbed wire and dark hillsides, I wondered how many people died along those roads, or in those ditches. I know it happened, yet it seeåmed impossible to imagine. How was this city, even what little of it I’d seen so far, on the same planet as Montreal and my house and my Greek takeout place and Tony and Ruble? Humans can’t be meant to cross such enormous distances in such little time. It’s like being on Dr. Who.

The next day I met with a guy associated with Nyaka, who works for Uganda’s equivalent of the BBC, but in newspaper form. The paper has a weekly section by and for kids across Uganda, and also encourages kids to use media as a platform for discussion and learning, which has the added bonus of improving their English. Some of the articles were impressively open, like why not to use old clothes as maxi pads (which are prohibitively expensive here, where many families earn less than $2 a day,) and a letter from a student about how her father was trying to sexually abuse her. Can you imagine something like that being published in a paper in our so-called progressive country?

I was supposed to take a bus to Nyaka the following morning, but instead got hooked up with a group traveling there the same day, who had an extra spot in their van. They run an amazing organization called Reach a Hand Uganda, educating youth about HIV/AIDS, teenage pregnancy, sexual health and empowerment. The team was joined by Miss Uganda, and a famous Ugandan musician, Maurice Hasa, whose songs also empower youth to make a difference.

I was told one of the things to expect in Africa is that schedules don’t operate the same way. Case in point: my taxi driver got lost and we got to the meeting point at 10, panicking because that was the time I was told we’d leave. We left at 11:30. We then stopped, no exaggeration, 6 times before we even left Kampala, finally getting on the road at 12:30 for what was meant to be a 10-hour drive. This didn’t seem to bother anyone, which I loved. In fact, it’s possible I was Ugandan in a past life.

I napped and daydreamed as we drove, staring out at the countryside and small towns and their ramshackle shops and overloaded motorbikes, sometimes carrying entire, helmet-less families, including young babies, which made my own lack of seatbelt sit slightly better. (I will pause here for my parents to pick themselves up off the floor.) And now, we’re crossing the equator. Just like that. If the equator ran through North America, there would be theme parks, t-shirts, stuffed equator mascots, those weird dried ice cream pellets and a fucking marching band and a yearly festival sponsored by Molson and some energy drink. Here, there’s just this: 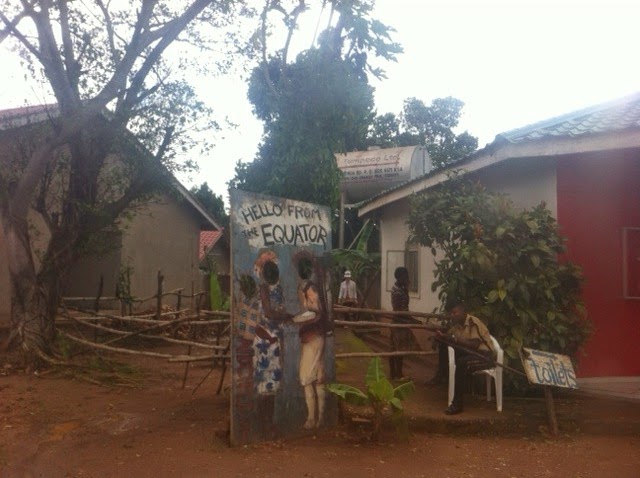 We stop at an outdoor market, and are besieged by desperate-looking vendors brandishing plates of bananas and sticks of entire, very small chickens, and (as Maurice explained) goat’s meat. I try some goat. It costs $0.40, and is tough and utterly delicious. Suddenly, I notice that one of the vendors, a young woman, is wearing a Montreal Canadians toque. Stunned, I ask our driver to ask her if I can photograph her through the window. I post the photo on Facebook, with the caption of how here I thought crossing the equator with Miss Uganda was the craziest thing that was going to happen to me today.

A few minutes later, we pass a herd of zebras by the side of the highway. 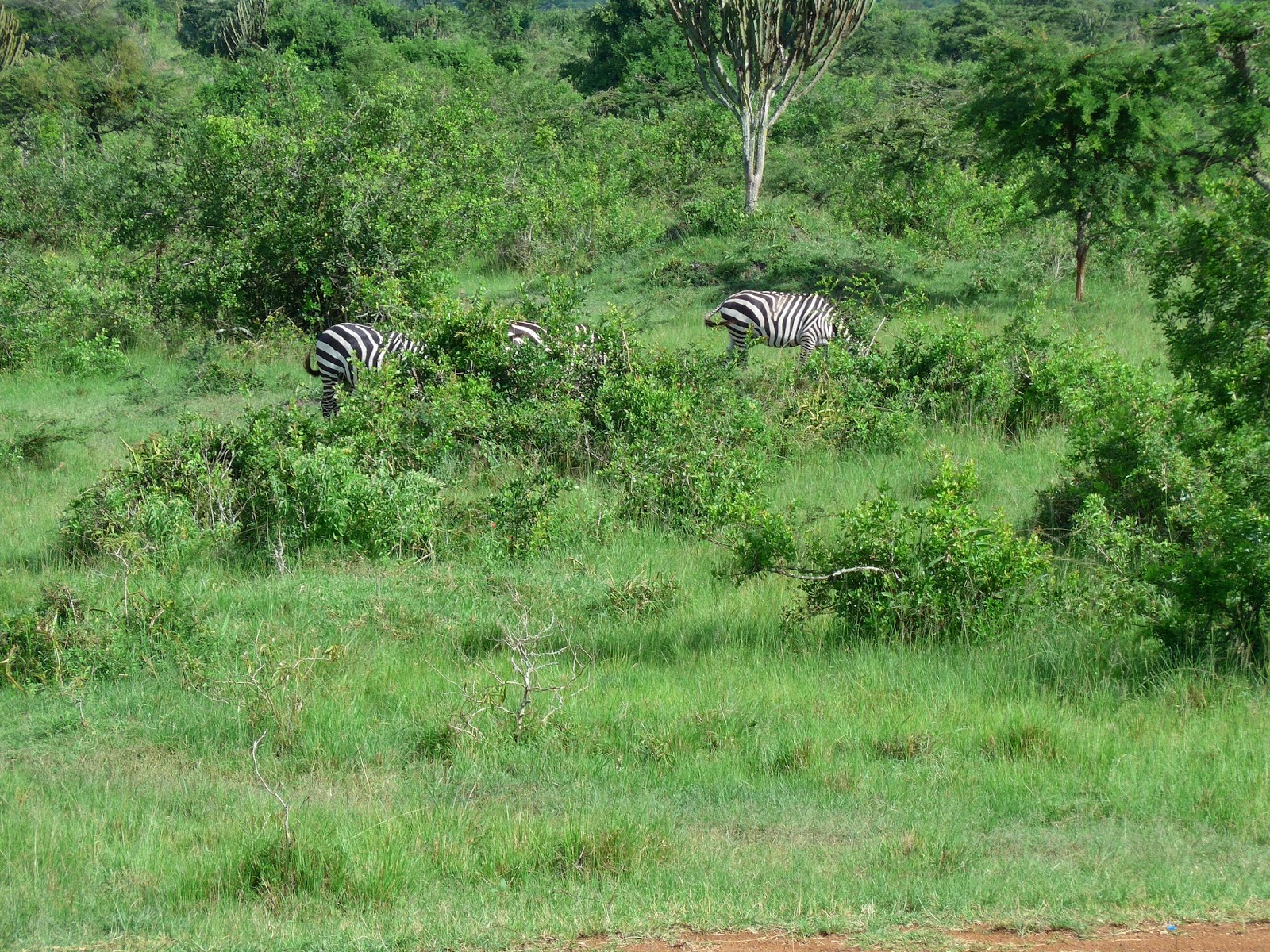 We drive on. And on. We stop at another town because the van has an engine problem, and I continue to enjoy how unconcerned everyone is about this, too. I use a hotel bathroom and catch myself greeting some Americans with, “Hello, white people!” which is the sort of thing you really can’t get away with in many other situations. We get back on the road, it gets dark, and I fall half-asleep while they watch a Hollywood movie with the film’s actual sound cutting in and out and one guy translating the plot and dialogue in Luganda, yelling excitedly and even laughing when outrageous things happen on the screen. It’s charming at first, but gradually starts to grate on my nerves. The big question has started gnawing at me again: how far I am from home, how long I’m going to be here, how I have no idea what I’m in for. I don’t like it, this question. It’s uncomfortable at best, and right now is not best. My bum hurts. The roads are getting even worse, lunging us forward and backwards, the van shuddering and lurching, the floor beneath my feet almost too hot to touch. I try to remind myself how privileged I am compared to most of the people we’re passing, but this just makes me feel like an asshole.

We enter a national park, and our driver points out some hyenas. I sit bolt upright, my face pressed against the window. Another hyena. Then another. Then, a hippo crosses the road in front of us. I am ecstatic. A HIPPO. It looked just like the ones on TV. I’m in Africa, I think. I’m in –

“Elephant!” our driver calls out, slamming on the breaks.

There are two of them, about 40 feet away, ambling along like it’s totally normal. I’m beside myself now. I look up at the stars, and think, I’m in fucking Uganda. I still don’t know why, but somehow, those great giant beasts with their tusks and flapping ears and huge bums are enough of a reason for now.